The term Le Puy green lentil can only be used to describe lentils that come from Le Puy in the Auvergne region of France where they have been grown in the nutrient-rich volcanic soil for over 2,000 years. Highly revered for their refined peppery flavor and ability to retain their shape after cooking, they stand head and shoulders above the less flavoursome – but much cheaper – green lentil which I use to create dhals and soups. In dishes where the lentil is king – such as this salad – I tend to go for Le Puy, the uncooked version (I’m not at all a fan of the vacuum-packed cooked lentils because I think that they taste a bit sweaty and they’re often too mushy). Although this recipe is a classic one, I first made it one summer when we rented a rural gîte high up in the secluded mountains of the Tarn Valley in France. One day, the normally hot and arid weather was punctuated with a series of torrential rainstorms which made it impossible to leave the house so, a consolatory glass of red in my hand, I made this for lunch. It is light but warming at the same time and it’s really great served alongside a plate of local cheeses, crusty bread and, of course, a glass or two of Malbec. 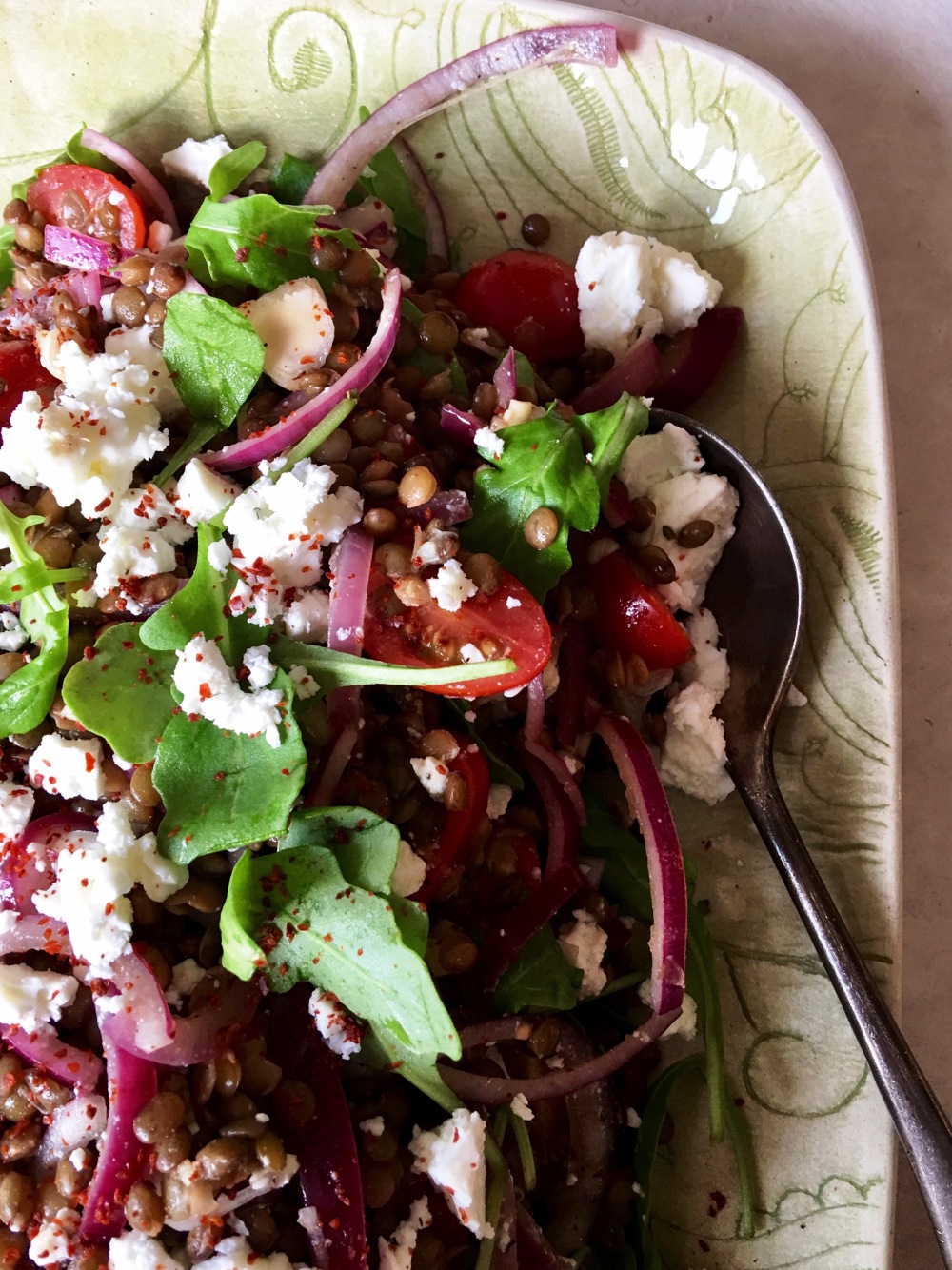 How I make it

Place the onion in a bowl and, using your hand, work in the sumac. Cover and set aside (this process removes the natural sourness of the onions making them much nicer to taste and easier to digest).

Heat a small frying pan, add 1 tbsp of the olive oil and gently fry half the onions until they soft and sweet. Take off the heat and leave to cool.

Meanwhile, place the lentils in a medium pan and cover with  500ml of cold water. Add the whole garlic clove, bay leaf, peppercorns and red wine vinegar. Bring to the boil, cover and simmer for 20-30 mins until the lentils are tender. Drain off any excess water and remove the bay leaf and the peppercorns (be warned, you’ll have the devil’s own job to find them but persevere because they don’t soften during the cooking process). I usually squish the cooked garlic clove into the lentils but remove it if you prefer.

At the same time, in a large mixing bowl, create a light dressing by combining the remaining olive oil with the sherry vinegar and the crushed garlic clove. Season to your taste.

When the lentils are cooked, gently combine with the cooked and uncooked onions, tomatoes, crumbled feta and dressing.

To serve, add the roquette leaves (or chopped parsley) and a cute sprinkling of sumac.

This site uses Akismet to reduce spam. Learn how your comment data is processed.