On a recent trip to Tuscany, I was astonished to discover that the covered markets in both Lucca and Pisa had been closed down. It seems that even the Italians are succumbing to pre-prepared food that can be grabbed on the go. Indeed, one man I spoke to who reminisced fondly about the dishes his quintessential Italian nonna made for him as a boy said hers was a practice rarely even touched upon by his hard working mother who simply couldn’t face the kitchen after a long day at work. Because of the slow decline in the demand for fresh seasonal produce in Italy, its covered markets are slowly being taken over by purveyors of cheap imports so diluting the culture of its regional towns and cities. The Mayors are simply closing them down. I hope that this worrying trend is reversed sooner rather than later because, for most of us visiting Italy, its rich culinary heritage is one of the main attractions. Luckily I discovered a glorious thriving market in the centre of Livorno – the Mercato Centrale, the largest covered market in all Italy – and it’s as traditional as they come. So much so that pretty much every bar around its generous circumference was frequented by men as their women shopped and gossiped in the vast and airy interior. How I envy them. Here you will find everything that your heart desires: a mouthwatering array of glittering fish freshly plucked from the Mediterranean, live lobsters and giant langoustine (which probably came from England’s sweet waters); sweetly imperfect tomatoes of every shape, colour and size; peaches slightly rotting in their wooden crates but oh-so-sweet to taste; courgettes with their golden blousy flowers still attached; stand-alone kiosks specialising in thick, grassy extra-virgin olive oil, pulses, nuts and hand-crafted pasta; ‘Fantasie di Pane’ who specialise in freshly-baked focaccia and artisan loaves; coffee stalls selling tiny cups of espresso for the workers who stop by every hour or so for a quick fix to be knocked back in one easy movement; delis specialising in Tuscan produce and, amongst it all, tiny cafes selling cold beers and simple fare made from whatever’s selling that day. Women – looking as if they’ve just walked off of Federico Fellini filmset (I kid you not) – sit on one side sipping wine whilst their men sit on the other. Reunited at last, all of them speaking passionately about nothing at all. Just life in all its glory and all its beautiful mundanity. As ever, I am frustrated on these jaunts that I am merely passing through without a kitchen of my own in which to take a basket of ingredients for the purpose of making a delicious lunch or a long lingering dinner. But I am inspired. I remember all the sights, the smells and the sounds as they touch my senses. I remember what it might feel like to become a local – I would surely visit the market every single day – and make up recipes based on whatever I could find. All inexpensive but beautifully fresh. This is one such dish, a simple and summery white bean, tomato and white cheese salad that I made on the day that we returned. It’s super easy to pull together and absolutely perfect for this long hot summer when English tomatoes are better than I can ever remember. 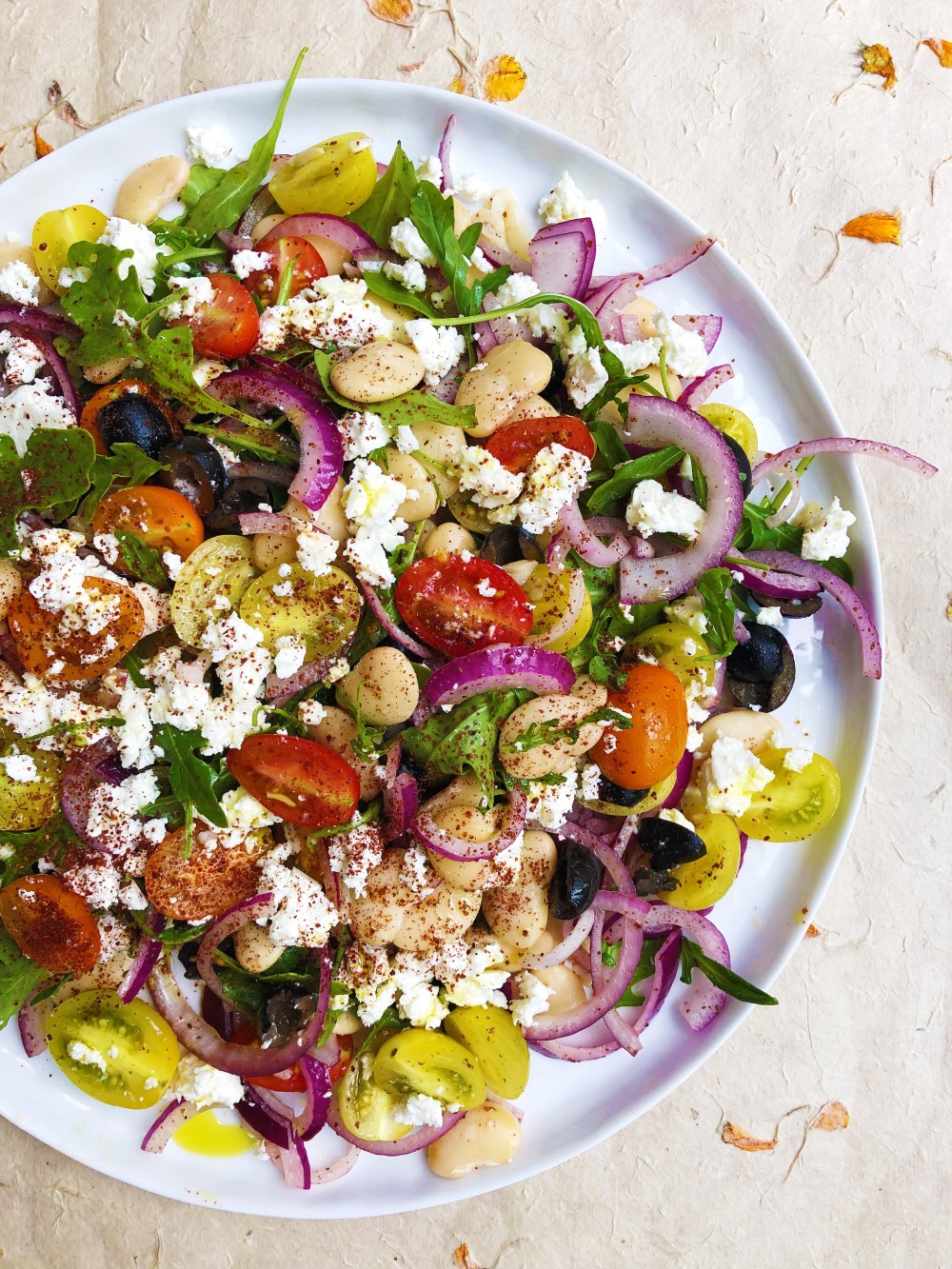 How I make it

Finely slice the onion, mix it with the sumac and set aside for an hour. This takes away the sourness of the onion and makes it easier to digest.

Whisk the olive oil, vinegar, chopped shallot, a pinch of salt and a few generous grinds of black pepper together in a large bowl. Tip in the other ingredients, gently mix together and season to your taste.

This site uses Akismet to reduce spam. Learn how your comment data is processed.